And here we have wonderful new cover stories in the soon to be released Entertainment Weekly magasin! 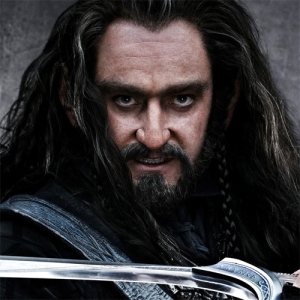 Thorin Oakenshield is a major character in The Hobbit and is mentioned in passing in The Lord of the Rings. He was the leader of the Company of Dwarves who aimed to reclaim the Lonely Mountain from Smaug the dragon, and was the son of Thráin II, the King of Durin’s Folk in their exile from Erebor, and the grandson of King Thrór.

Thorin is described as being very haughty, stern, and officious. He has a talent for singing and playing the harp, wears a gold chain, and has a very long beard. His appearance is also characterized by his distinct sky blue hood. He refers to his homes in the Blue Mountains as “poor lodgings in exile.” He is a capable and a cunning warrior, if not a particularly inspiring or clever leader.

Thorin and twelve other Dwarves, mostly relatives of his or others of Durin’s Folk, visited Bilbo Baggins on Gandalf’s advice to hire him as a burglar, to steal back their treasure from Smaug. He especially wanted the Arkenstone, the Heart of the Mountain.

He alone was not taken by complete surprise when the company encountered a band of Trolls, and he and Gandalf fought valiantly in the Goblin tunnels. Even so, his leadership is not particularly distinguished until very late in the quest, and then he does not show much wisdom. Thorin is the first to be captured by the Wood-elves of Mirkwood, and insists that the other Dwarves not disclose their quest to their captors. He is the first to emerge from the barrels at Lake-town and marches right up to the leaders of the town, declaring himself as King Under the Mountain.

Thorin was furious when Bilbo stole the Arkenstone to use as a bargaining counter with Thranduil, the Elvenking, and Bard the Bowman, both of whom had some claim to the treasure. The conflict was averted by an attack of Goblins and Wargs, and the Dwarves joined forces with the Elves, the Men of Lake-town, and the great Eagles to defeat them in what came to be known as the Battle of Five Armies. During the battle Thorin was mortally wounded, but before he died he made his peace with Bilbo.

“If more of us valued food and cheer and song above hoarded gold, it would be a merrier world. But, sad or merry, I must leave it now. Farewell.”
The Hobbit, Thorin’s last words.

Thorin had recovered the Elven blade Orcrist during the quest. He came upon it in a Troll stash (after barely escaping with his life). He used it throughout the Quest of Erebor, but it was taken from him after he was captured by the Wood-elves. The sword was given back after his death and was laid upon the tomb (the Arkenstone was placed in the tomb itself) so that ever after the blade would glow blue should enemies approach and the mountain could never be taken by surprise. Thorin was succeeded as the leader of Durin’s Folk by his cousin, Dáin Ironfoot.

Feel free to comment below or have a discussion on this topic in the Forum.

A quick understanding of the 13 Dwarves’ relationships

Richard Armitage (born 22 August 1971) is an English actor. At 17 he joined a circus in Budapest for 6 weeks to gain his Equity Card. Armitage then returned to Britain to pursue his interest in musical theater. He appeared on stage in various musicals, including Cats as Admetus and Macavity.

In time, Armitage drew weary of musical theatre and returned to school to study acting, where he did so at the London Academy of Music and Dramatic Art (LAMDA). “I had started on a certain road in musical theatre and I was about 21 when I suddenly thought this is not quite the right path I am taking. I needed to do something a bit more truthful than musical theatre. For me it was a bit too theatrical and all about standing on stage and showing off. I was looking for something else, so that’s why I went back to drama school.”

After graduating from LAMDA, he returned to stage to appear as a supporting player with the Royal Shakespeare Company’s productions of Macbeth and The Duchess of Malfi, as well as Hamlet and Four Alice Bakers with the Birmingham Repertory Theater while taking a series of small roles in television and films.

His first major television role was in the BBC drama Sparkhouse (2002) as the shy but noble John Standring. “It was the first time I went to an audition in character. It was a minor role but it was something I really got my teeth into…I couldn’t go back. I knew I had to approach everything the same way.” After this he took a variety supporting roles in the TV productions of Between the Sheets, Cold Feet (series 5), and Ultimate Force (Series 2).

In 2004, Armitage appeared in his first leading role as John Thornton, in the BBC adaptation of Elizabeth Gaskell’s North and South. Armitage felt personally drawn to the role due to his northern working-class family background. “My father’s family were weavers and spinners. It was where I came from and it was exciting to think I could be a part of it.” He also cited Thorton’s dualism as drawing him to the character. “The dichotomy between the powerful, almost monstrous, entrepreneur and this kind of vulnerable boy is exciting for me to look at.”

Then in 2006, Armitage took on another major role of Sir Guy of Gisborne in the BBC series Robin Hood. “In order to sustain the character of Guy, you have to find the conflict within him. He’s constantly pulled between good and evil, between who he wants to be and who he actually is. He could have been a good man, but he is forever dragged down by his fatal flaw – that he wants glory at all costs.”

In March 2009, Armitage began filming for Series 8 of Spooks, which began airing in November 2009. In July 2010 he finished filming series 9, due to be broadcast in late September. On 20 May 2009, he also appeared in the BBC1 drama Moving On as John Mulligan.

In May of 2010, he starred as John Porter in “Strike Back” for Sky 1. On playing John Porter Armitage stated, “On paper it is pretty obvious what kind of drama “Strike Back” is, but the driving challenge for me and the scriptwriters and directors was to find the emotional centre of John Porter. How does a man become a trained killer and then go home and put his arms around his wife and rock his baby daughter to sleep? How can a soldier not have a conscience about what he is being asked to do?”

Sky1 has been signed on for a second series of “Strike Back”, due to be broadcast late in 2011.

Feel free to comment below or have a discussion on this topic in the Forum.